Farm.Dad
I am the father of 2 grown children and the grandfather of 2 grandsons living in Southeast Colorado and Ranching among other expensive hobbys .

The case for the Judge: Buzzworms

It seems everyone has an opinion on the little beast good or bad . I have read posts calling it everything from a gimmick to a boat anchor .  Without a doubt it is a niche pistol which would not be suitable for everyone .  However SWMBO fondled one and promptly issued an edict…. Get Me One! Whereupon I rolled my eyes and hoped she would forget. No such luck .

So with some soul searching , and the sale of a rifle i did not shoot a lot (a guy has to know both his limitations and his priorities ) She got one .

Test  shooting the Judge shows  it to be moderate in both recoil and accuracy ( minute of pop can at 20 paces ) with .45  and a close range proposition with shot shells on such targets as barn pidgins .

Yesterday the bride was moving the tractor to till the garden and I went on ahead to get the disk ready . 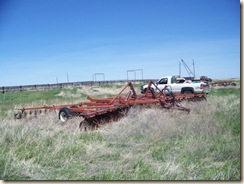 The disk had set for a year , tires were flat , bearings dry , and I needed to change the ends on the hydraulic hoses for this brand of tractor .

So there I was…

Climbing over and thro said disk when I dammed near kneeled on a rattlesnake.  Now I am a live and let live sort of fella for the most part but let me tell you , this little legless bastard was way to excited for my good .  I promptly set the county record for the grease gun throw , and hit the end of the air hose (which evilly attacked from its coil beside me  in support of a critter that looked like it ) akin to a dog hitting the end of the chain .  Now I carry a pistol , but  a standard pistol round shot into a maze of that much steel from close range is not the best idea anyone ever had .  To the pickup I went and out came the Judge .

By this time  the sucker had moved a few feet but not far enough . 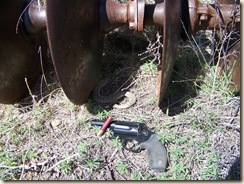 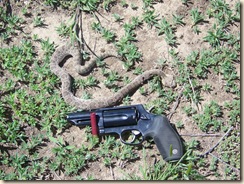 The Judge went on the belt and I continued on for a bit until about 10 feet away I ran across another one which met a similar fate . 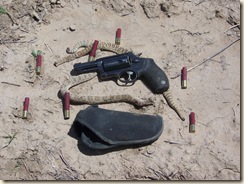 Yes the heads and rattles are removed , I keep the rattles and bury the heads leaving the rest of the snake for a hungry hawk , badger , or whatever . The reason i bury the head is because of the fangs which are fair sized even on a small prairie rattler, 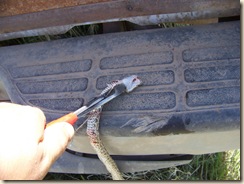 and possibly full of venom , not to mention still connected to the venom sacks . Not something you want to step on , or have stock step on .

I have to say that in the niche of a ranch utility pistol  the Judge is hard to beat . It is a nearly immediate off switch for vipers , and in the .45lc  both powerful and accurate enough to put down a bull that has broken his leg as I had to a while back ( no i did not take pics of that ). 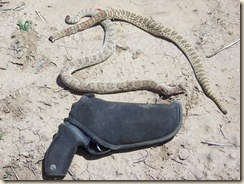 The Judge is also avalable in a 6.5 inch barrel ( this one belongs to a friend ). 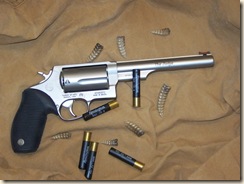 I would not buy a Judge for a defensive pistol , although I would not feel unarmed if i had to press one into that role with the .45lc option . Its that I simply feel there are a lot better options out there .  The Judge shines where a  person needs both hands free to work and a portable vermin control firearm is desired . Or where a person wants a fun and unusual pistol with a steampunk appeal .

The  Time comes every year , and every year we are late but Yesterday the decision was made that the garden must be tilled for planting.

Its nice to have a garden plot bigger than the archive of Pelosi’s truthful statements so we used an abandoned earthen inslage pit to shield from the winds we get . 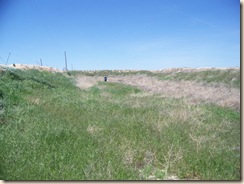 First order of business is to get rid of the dammed Russian thistles ( Tumbleweeds ) as easily as possible so fire is involved . 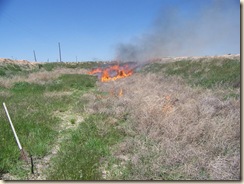 As you can see it did a “ fair “ job  with most of the dead matter too thick to till . 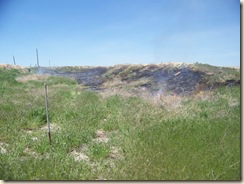 Next you need to actually till the ground . We prefer a Garden tractor for this so here is ours . 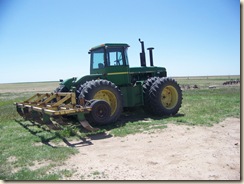 First you must prepare the ground for tilling breaking it up a bit so it will till to a useable depth without big clods . 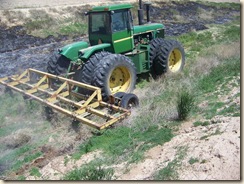 Then a couple of passes with this …. 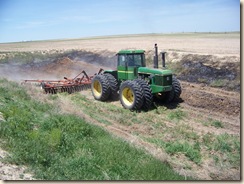 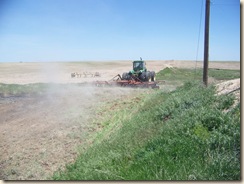 and you get this.. 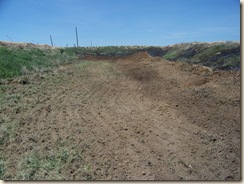 One more pass with the original implement. 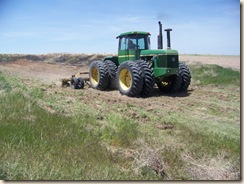 and you have the ground ready for planting including rows laid out for corn . 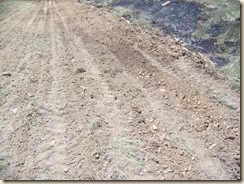 Drop the seed in , cover and water with either sprinkler hose or soaker drip hose and your in business .

That folks is how you might choose to do it if you farm .