Farm.Dad
I am the father of 2 grown children and the grandfather of 2 grandsons living in Southeast Colorado and Ranching among other expensive hobbys . 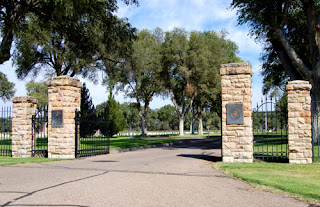 Our National “day” of Beer & BBQ has rolled around again it seems .

When I was a Lad this weekend was knows as “ Decoration Day “ and was a Sunday that we took to the road to put flowers on the graves of family and folks we knew that had no family able preform this solemn service of respect. From old west Desperadoes to the consumptive Doctor who came out west for his health , Children killed by mishap to Veterans who served our nation . Stops were made at family plots hidden from the hustle and bustle of modern times along with the long abandoned homesteads they came from . Horse Thief to Housewife , if my Grandfather knew a grave would not be attended to he considered it a duty to do what he could in cleanup or repair where ( as often happened the cattle had gotten into the plot ) weeds had blown/grown in or headstones had fallen , and leave a token of remembrance.
Some years Decoration Day lunch was cold chicken , others it might be baloney sandwich but it was about assured to be eaten on the tailgate setting in a rural community cemetery or abandoned family plot while taking a break .
Time has moved on and changed , the little community cemeteries have caretakers who do it for love and a pittance now , and many of the homestead plots have been plowed under . Nowadays we just decorate family graves for the most part although this entails a little over 100 miles of driving one way to do . 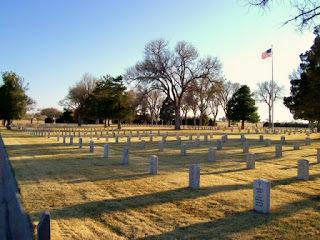 Today as I stood in the small National Cemetery at Ft Lyon to lay flower on my dad's grave I looked across the rows of marble markers , each with its small flag as stiff as iron in the 40mph wind and again realized that this peaceful sward , this quiet, sacred ground that is the final refuge of so many warriors is only part of the story and obligation, after all to Memorialize is to Remember . 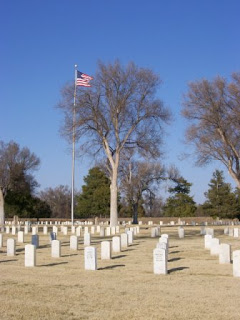 You see Ft Lyon until 2001 was the V.A. Hospital that was home to the Vets that made it back , but never really came home. Shell Shock , PTSD , all manner of psychosis and mental infirmity. If they were so broken and shattered that they could not function in “ polite “ society this is where the V.A. placed them . It had the lock wards for the chronically violent and newly admitted . The fenced recreation yards , the armed V.A. Police 24 – 7 . All of this was needed. As the walking wounded would progress , finding a chemical saturation that somewhat quieted the voices , visions , or memories they would make the transition to outpatient status , sometimes only with the lifelong aid of a halfway house to make sure they were fed, bathed, and took their meds .
The local town of Las Animas was pretty much a company town with Ft Lyon providing the majority of the payroll directly or indirectly . Most of the town prayed for and with “ the patents “ , a few preyed on them .
I Remember Dr. John Hester who was also a Colonel in the Colorado National Guard and who quite possibly cared too much , bringing his work home with him and worrying about everyone on the ward , I was lucky to count him friend . I remember “ Tenie” Palamino who worked in the kitchen out there and would drop plans at a moments notice to fill in a shift when things made the schedule go pear shaped . I remember Debbie and Jerry Hegdgeland who owned the local sub-shop and would spot a patent a meal or two till his next check … and how many times they “ forgot “ to ever present the bill . I remember the several good half way houses , and the abuses of the bad ones over the years . But most of all I remember the patents struggling to “ fit inn “ in town with their Thorazine shuffle or Haldol list .
Walking Johnny had lost himself somewhere between Seoul and Saigon , but sun , snow , or rain would be on the street by 0700 crossing the tracks to the meager downtown area , chain smoking as long as his stipend held out, bumming them after , and visiting with missing , possibly dead friends only he could see unless he could corner someone for a few moments of conversation that always began by apologizing for being “ weird “ and ended when they had to leave because his schedule was pretty flexible .
Peggy – Jim was two people , She smoked , he hated it . He loved to dip his french frys in Mayo , she couldn't stand the stuff . Name a topic and they would argue about it seemingly passing the mouth and vocal cords back and forth . I never knew the back story of this fella but never saw him when he didnt have a cheerful smile for anyone who would interrupt his internal ( and external ) dialog .
Dave who came back from the indochina games seemingly fairly normal for months at a time , enjoying life , his bike , and a fine collection of knives . Until he would again find himself lost in the jungle , alone , afraid , and desperately seeking friend of foe . He never hurt anyone and was a gentle sort of man day to day , but it was too close too many times . His own private hell was the fear of what he might do and strived so hard not to .
“ James” Davis left his halfway house on one Thanksgiving day , walked to Corkys Motel where he had libation with a friend most of the day . As the party came to a close he also beat said friend to death because he had drank the last sip of 4 roses whiskey,  by curb-stomping his head into the commode while he was bent over puking , then had repeated relations with the corpse for the next 6 or so hours . His halfway house took the payments for his care but seemed to fail to insure he took his meds .

Damaged , Broken men seemingly without family for the most part sent as far from the visibility of the normal V.A. System as possible to live the best life they had left away from any possibility of publicity or notice NIMBY indeed . Many of the men spent the remainder of their lives in the small town far from anywhere of note , doing the best they could to balance the medication with actually living and feeling rather than existing in a haze . Balancing being “ weird “ with just being present sleepwalking through the days without the pain of noticing the looks given them by the unknowing or uncaring .

In the downsize of the VA in 2001 the Hospital was closed , and the patents moved out to who knows where? Parceled here and there I suppose in small groups to continue as they had here doing the best they could with the hand life had dealt .

Gone from local notice , but not forgotten !

I Remember . I have time for that visit , a cup of coffee , and a smoke you can bum while we talk . Not just today , but anytime you see me you have more than paid for my notice and compassion . You will not be forgotten , and I am proud to count men among you as my friends.

This too is the price paid for our freedom to have the Beer and BBQ weekend every year that kicks off Summer . Its a high price to bear , and how much higher it must be to pay it invisibly .